Skip to the content
Lunch
Berkoff's plays are razors, edged with humor, sex and exposed vulnerabilities.

A man encounters a woman whom he finds enormously attractive. Introductions ensue and the subsequent exchange of “viscous bodily feelings” is a contest of wit that spirals into an unique seduction.

In this wham-bam 40 minute encounter, histories are revealed, clichés avoided and a unique post-coital recognition is achieved.

Steven Berkoff’s language is visceral, humorous and provocative, but it is always authentic and honest. 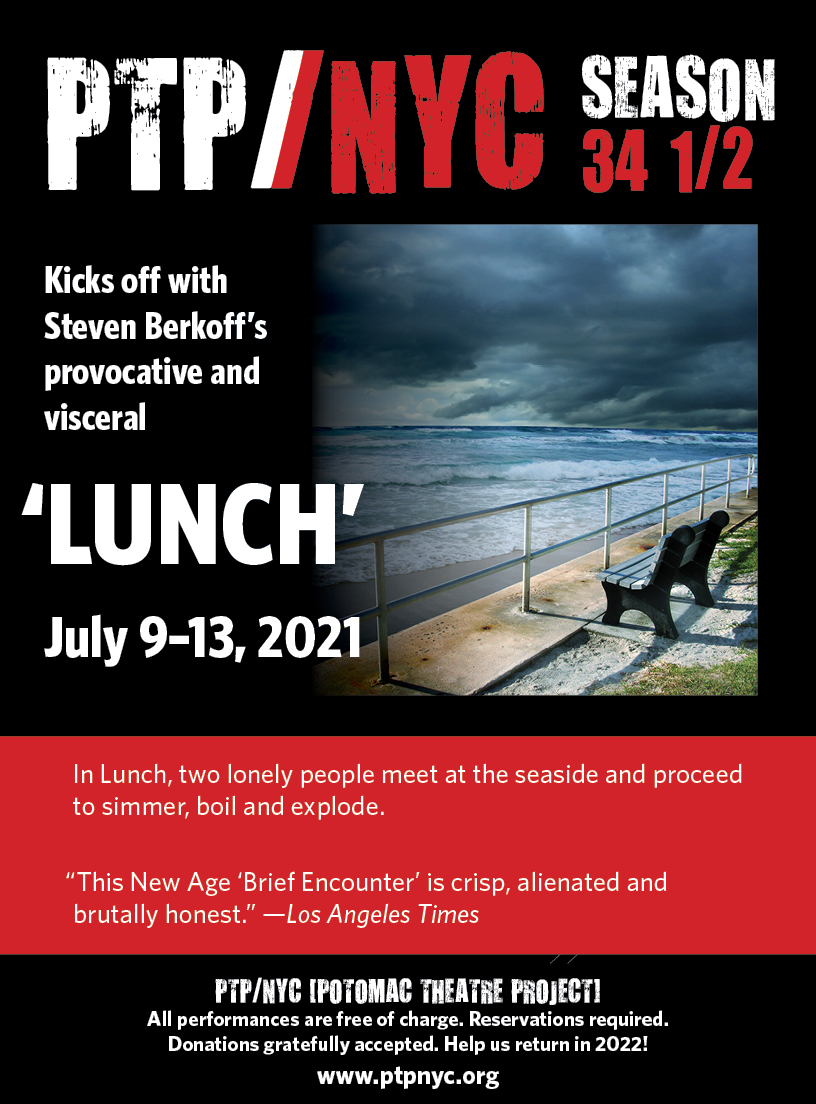 Bill Army began his professional acting career in “Somewhere in the Pacific” directed by PTP Co-Artistic Director, Jim Petosa.  Over nearly two decades, Bill has worked with Co-Artistic Directors Richard Romagnoli and Cheryl Faraone, and Associate Artistic Director, Alex Draper on over twenty productions and readings.  Most recently in “Scenes from an Execution” and “Vinegar Tom.”  And though Jim, Cheryl, Alex, and Richard hate sentimentality, Bill wishes to thank each of these brilliant artists from the bottom of his heart for their impact on his life…but he was only offered 100 words in the program, so there isn’t enough space.

Steven Berkoff was born in Stepney, London. After studying drama and mime in London and Paris, he entered a series of repertory companies and in 1968 formed the London Theatre Group. His plays and adaptations have been performed in many countries and in many languages. Among the many adaptations Berkoff has created for the stage, directed and toured, are Kafka’s Metamorphosis and The Trial, Agamemnon, and Poe’s The Fall of the House of Usher. He has directed and toured productions of Shakespeare’s Coriolanus also playing the title role, Richard II, Hamlet and Macbeth, as well as Oscar Wilde’s Salome. Berkoff’s original stage plays include East, West,The Messiah: Scenes from a Crucifixion, The Secret Love Life of Ophelia, Decadence, Harry’s Christmas, Massage, and Acapulco. He has performed his trilogy of solo shows, One Man, Shakespeare’s Villains, and Requiem for Ground Zero, in venues all over the world. Films Steven has acted in include A Clockwork Orange, Barry Lyndon, Octopussy, Beverly Hills Cop, Rambo, Under the Cherry Moon, Absolute Beginners and The Krays. He directed and co- starred with Joan Collins in the film version of his play Decadence. He has published a variety of books on the theatre such as the production journals I am Hamlet, Meditations on Metamorphosis, and Coriolanus in Deutschland. Berkoff’s work has led him to traverse the globe, and his love for travel is apparent in his book Shopping in the Santa Monica Mall: The Journals of a Strolling Player.

In 1986 Richard Romagnoli co-founded and has since been the Co-Artistic Director of the Potomac Theatre Project. PTP/NYC; Director, For PTP/NYC, private and public Zoom productions of Pinter’s Press Conference/Party Time, Howard Barker’s poem Don’t Exaggerate. His most recent ‘live’ production for the company was 2019’s Havel: The Passion of Thought. For PTP and other theatres he has directed multiple productions of Howard Barker’s The Castle, Scenes from an Execution, The Europeans, A Hard Heart, Pity In History and The Possibilities. He has also directed Barker’s Judith, Gertrude— The Cry, Victory: Choices in Reaction and Barker’s poems ‘Gary the Thief,’ ‘Plevna: Meditations on Hatred, ‘and ‘Don’t Exaggerate.’ For the worldwide 2010 Barker celebration “21 for 21”, he directed Judith with Jan Maxwell, Alex Draper and Stephanie Janssen. Other playwrights directed for PTP include Harold Pinter, Edward Albee, Gore Vidal, Vaclav Havel, Pavel Kohout, Snoo Wilson, Howard Brenton and Tariq Ali. In Washington D.C. he has directed Dumas fil’s Camille (with Jan Maxwell), Pinter’s The Homecoming, Coward’s Private Lives, and The Importance of Being Earnest for the Olney Theatre Center, and has also worked with Project Y in D.C. and in Boston for Whistler in the Dark. He is a professor emeritus of theatre at Middlebury College in Vermont, where he directed numerous plays, including, most recently, Major Barbara, Havel: The Passion of Thought.

Courtney Smith is a scenic, media designer, and technician for live performance. He is currently the Production Designer for the Department of Theatre at Middlebury College. Courtney’s designs have received several Meritorious Achievement Awards from the Kennedy Center American College Theatre Festival. Additionally, his work received a “Distinguished Achievement Award in Scenic Design” from the Kennedy Center in Washington DC.

Courtney is a member of United States Institute of Theatre Technology (USITT) and received his MFA in scenic design from the University of Idaho.

Bella Costantino-Carrigan is a recent graduate of Middlebury College with foci in acting and costume design. Middlebury design credits include Ophelia Underwater, Big Fish, Happy, No One Is Forgotten, Gidion’s Knot and Airswimming; acting credits include Ophelia Underwater (Ophelia), She Kills Monsters (Agnes), and Happy (Melinda). She is thrilled to be returning to an (in-person!) PTP season after costume designing Lunch for the virtual 2021 season. www.thanksbella.com

Madison Middleton is delighted to be making their official PTP debut! They are a Theatre and Music joint major at Middlebury College. Middlebury acting credits include Brutus in Julius Caesar, Margaret in The Light in the Piazza, Andrea in Giants Have Us in Their Books, and Tattooed Woman in Bacchae 2.1. Some DC/Maryland acting credits include Kate Monster in Avenue Q, Fraulein Schneider in Cabaret, Catherine in Proof, Orpheus in Polaroid Stories (The Theatre Lab), The Hunchback of Notre Dame (The Theatre Lab), Children of Eden (Young Artists of America at Strathmore). Madison is interested in LGBTQIA+ theory and aesthetics, musical and theatrical world-building, puppetry, magic, and environmental justice through art-making.

A professional patternmaker/draper, Carol Wood has been teaching costume cutting and construction through her custom costume business and at design schools in California and Vermont. She is known for recreating, wearing, and writing about historical garments. For the past two decades, her work has been honored with awards, shown in galleries, worn to period events, appeared on the stage, and escorted down the wedding aisle. Carol also worked as an assistant cutter in San Francisco Opera’s Costume Shop and is currently Costume Shop Director in Middlebury College’s Department of Theatre. Her motto: Cinch it tighter!

Caroline Armour is excited to participate in her first season of PTP. She has performed in A Monster Calls, Mamma Mia, Find Me, Alice in Wonderland, and A Streetcar Named Desire. Caroline went on to become the Assistant Director for A Midsummer Nights Dream, In The Heights, Spring Awakening, Lord of the Flies, Puffs, and Matilda. Previously she wrote and directed a production of Something Wicked This Way Comes, and a stage interpretation of The Office. Caroline is currently working on her BA in Theater and French at Middlebury College.

Gibson Grimm is a Theatre and Film double major at Middlebury College from Jacksonville, Florida. His Middlebury acting credits include Mr. Burns, A Post-Electric Play, She Kills Monsters, Giants Have Us in Their Books, The Bacchae 2.1, Untitled Romantic Comedy, Working, and the First Year Show. He recently directed I and You. Outside the department, he is a member of Middlebury Discount Comedy, is a Social Activities Co-Chair for MCAB, and co-hosts a radio show.

* member of Actors’ Equity Association, the union of professional Actors and Stage Managers in the United States
◊ member of the Stage Directors and Choreographers Society
º member of United Scenic Artists, Local USA 829